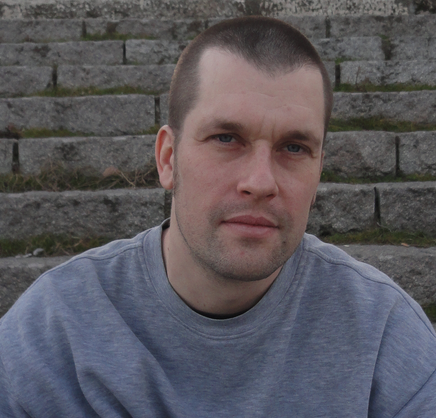 2018 - ... Developes his own projects and works for film festivals

Born in Belgrade, Serbia in 1982. The entire childhood was like a dream, spent in drawing, painting, sculpting, modelling, making thigs out of things, playing circus, theatre, quests of uncharted and unknown...

After my graduation from High School i devoted myself to painting, admitting finally to myself that there's nothing else I want to do in life except art. After spending two years working intensively in studios of couple of Belgrade artists and failure to pass the entrance exam at the Belgrade Academy for fine arts, I had to except the bitter reality and leave my dreams for a while, in order to organize my life and try to secure for the future.

My studies of German language and literature (2002-2008), proved not to be as depressing experience at all, as I firstly expected. Diving into the rich history of German literature and countless works of its authors which I wasn't very familiar with, was more than comforting, and the language itself, which I liked since the elementary school, despite being hard to tame, was opening the new door to something I felt might be waiting for me in the future. The whole journey was a sucess: i got my degree in February 2008.

The period after my studies, which I spent working as a school teacher and considering if I would try once again to get into art academy, was vital for making radical decision that would change the entire course of my life. Exhausted from both language studies and painting, I decided to devote my entire energy to something I always dreamt about, but never dared to consider doing it: film making. From that moment on, everything changed quickly. I bought my first camera, created my first short films "The Big Bad Bag", "The final chapter" and "Enemy from within", got accepted into film department of Hamburg Art Academy HFBK and decided to leave for Germany and pursue my career there.

During my studies at HFBK (2011-2018) I created three short films, "Brainstop", "Warten auf sich selbst" "Maladies No.5", and my first feature film "Ana" as my finishing project, wrote couple of more scripts, including one for a feature film called "The fortress", and took part in many other film projects, playing different technical roles, mostly as light designer, editor and script and editing consultant. While developing scripts and practicing film directing, I devoted myself also to further develope my editing skills, to learn compositing and color grading. At my BA exam in February 2017, the jury offered me the MA degree for the work I presented. I didn't say no to that.

During my final years at HFBK, my friend and colleague form the studies, Jonatan Petré Brixel, gave me the proposition to take part in the film festival he was organizing in Berlin. I accepted his offer and soon found myself engaged in film selection, the job that at first has frighten me, but then proved itself to be very intense, interesting and rewarding, especially in sense of getting so much input from countless films I had to watch and experience in overall organization. After a while I got more and more involved and eventually dared to start my own project, helping to restore a seven year old festival in Serbia.